Become a Contributor!
By Julian on July 30, 2016 Advertising, Tournaments

Carlsberg advertised their beer at the Euro 2016 without mentioning their brand name or official slogan. Read on to find out why…

Let’s imagine the following scenario: A stadium with an enthusiastic crowd of 70,000 fans, millions of viewers at prime time in front of their TVs, superstars (plural!) performing a show and your company has the money and chance to sponsor a big part of the pitch-side digital advertising boards…

The question for you as the marketing manager is: “What would you put on these boards?”

Your most probable answer is: “Our logo, brand name, slogan, …”

However, here’s what a marketer at Carlsberg would answer: “We don’t show our logo, don’t mention our brand name and change our slogan so it doesn’t contain the name of the product that we’re selling!”

What??? Why would Carlsberg actually go that far and take such a risk to blow their advertising money?

Pitch-side advertising boards without the brand or product name

It happened exactly like this at the Euros 2016 in France. The pitch-side digital boards in the stadium showed the following: 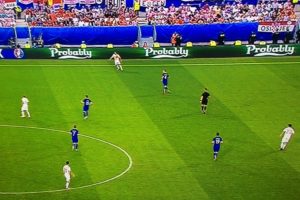 Why would Carlsberg do such a thing?

There are a couple of possible answers to that question:

It was neither a mistake nor an overly confident advertising strategy. It was rather born out of necessity.

In France applies since 1991 the so-called ‘Loi Evin’, named after its creator, the former Health Minister Claude Evin. The law prohibits the advertising of tobacco and alcohol on TV and in cinemas in order to protect the youth.

Knowing about the Loi Evin, one has to admit that Carlsberg solved the problem in a very creative way by simply using the slogan with which the company advertised its products from 1973 to 2011 worldwide: “Probably the best beer in the world”. Of course, the word ‘beer’ was also off-limits.