Even though the German record champion was defeated in this season’s Champions League by its Spanish rivals – the FC Bayern Munich is still leading the table in one category: the brand value. London-based ‘Brand Finance’ calculated the club’s brand value to amount to a staggering $896 million – no other football brand in the world is more valuable. 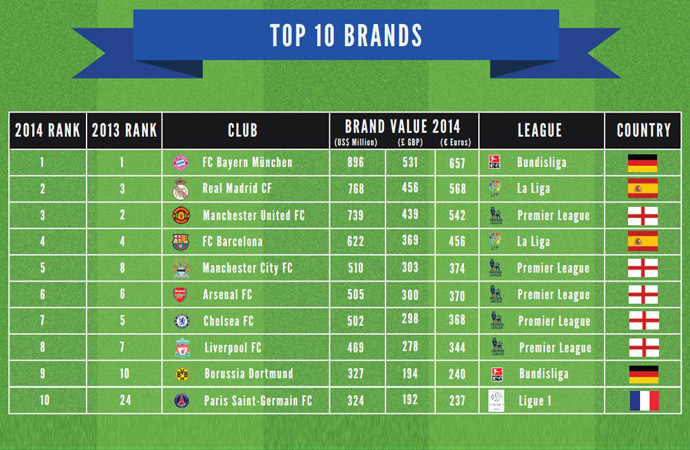 Bayern Munich is the most valuable brand

Due to an increase of $36 million compared to the year 2013, the team from Munich was able to secure this title the second year running. Having led the way as football’s most valuable brand for several years, Manchester United lost $98 million this year and Real Madrid (+ $147 million) was able to pass them in the ranking. This is not surprising as Real Madrid has the biggest sales of any football team and Manchester United played an unsuccessful seasons this year.

Brand Finance states that “another season in the wilderness, outside the Champions League, will see brand value truly plunge, and leave few sponsors willing to do a deal with the [Red] Devils.”

The biggest improvement in terms of brand value was achieved by France’s champions Paris Saint-Germain who are now worth $324 million against $85 million in 2013.