Become a Contributor!
By Julian on December 13, 2016 Branding, Tournaments

The Challenge: A Cross-Border Identity

The challenge was to create an identity, for both on-air and off-air promotion and coverage of the games, that could be the same all over Europe yet give each country’s National Football Association ownership of the brand. The intention was, also, to put the fans at the centre of the action.

The Strategy: Play With Heart

The strategic approach to achieve this was to centre the brand around two concepts: ‘Play With Heart’ and ‘Inside the Fabric of the Game’. 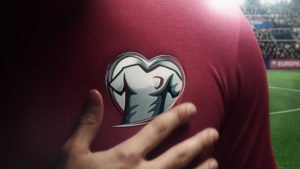 ‘Play with Heart’ was inspired by the players’ and fans’ passion and ambition for their national teams. This concept was developed into an eye-catching logo, depicting a national team badge combined with a stylised heart. The logo then provided inspiration for the rest of the visual identity. 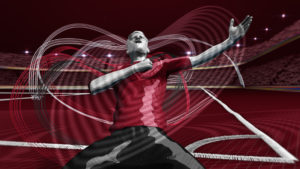 “Inside the Fabric of the Game”

The Creative Approach: A Consistent Look and Feel

The concepts were developed in parallel for all of the competitions on-air and off-air branding. This meant that a coherent, consistent, brand could be established across every branding element of the competitions from the on-air match play graphics, stadium branding, right down to the ticket design. 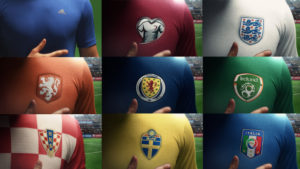 The creative agency ‘Jump’ designed the opening broadcast title sequence which encapsulates both brand concepts. The sequence takes the viewer into the European world of football through the team badge and uses the treads to portray the grace, power and movement of the players. The sequence was designed to be customised for every national team. Each one of the fifty five competing nations were supplied a sequence that had been made bespoke to represent their team. The opening of the sequence features their national team badge and the kit colors of the players in the sequence match the team’s national strip. This gives the team and the country ownership of the sequence and puts their team at the centre of the action.

Jump also created the off-screen, print and digital design to be centred around the European Qualifiers logo and designed images of a player in two different iconic football poses. These poses, ‘The Tackle’ and ‘The Save’, both feature in the opening title sequence and provide a key link between the on-air and off-air brands helping to strengthen the overall visual identity. The logo and the two player visuals were combined with a range of specially designed and constructed, versatile backgrounds and were used for all the match brand elements from programmes, tickets, notepads and bags through to wall signs, the team line up arch, media backdrop and billboards.

Working closely with UEFA, Jump has created this new brand that has resulted in a consistent look and feel through the branding of the UEFA and FIFA European Qualifying games. UEFA has achieved its aim of creating a brand that football fans recognise and that each of the fifty-five competing European nations and worldwide broadcasters want be a part of.

About Jump: Jump is a highly creative design agency who design and produce visual identities, 360 brands, international broadcast toolkits, and advertising campaigns for a host of agency, broadcast, corporate and digital clients. Jump have been producing visual identities for on-screen and off-screen for over 20 years. Everything they create is made in-house by their talented and dedicated design team, using their extensive design and animation hardware, allowing them complete control over the creative process. Interested? Find out more here: jumpdesign.co.uk