Become a Contributor!
By Julian on November 24, 2014 Design

As the most anticipated match in club football approaches, Berliners can be proud their city is featured in the official logo for the 2015 Champions League final.

European football is a huge business and there is no bigger enterprise in the game than the UEFA Champions League. This competition adopted its present format in 1993 and has since changed the face of the international soccer and created huge TV revenues for top European clubs. In the period from 2012 to 2015, a staggering amount of 900 million British pounds per season will be shared by the participants in the competition. Of course, the league wouldn’t be so successful if its brand wasn’t developed strategically and with attention to detail.

While the league is known around the world for its simple and recognizable logo, every year a special logo is created for the finals. This may sound strange until you consider how profitable this 90-minute event is for the league, the accredited TV networks and an army of corporate sponsors (MasterCard, Sony, Nissan and HTC, among others). The dramatic final in 2012 between powerhouses Chelsea and Bayern Munich drew global TV audience of more than 300 million, compared to “just” 112 million for the SuperBowl that same year. Knowing this, it becomes more logical that UEFA would invest so much in brand-building for a single match in order to complement its global popularity with some old-fashioned local patriotism.

The Champions League may be a brand that overcomes national borders, but it thrives on pride of local fans to support their expensive teams and fill the seats in stadiums week after week. Next year’s final is scheduled to be played in Berlin and you can bet this is prominently visible in the artwork. 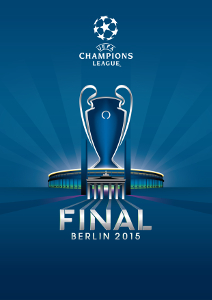 As it can be seen from the logo above, the UEFA decided to openly target German fans with an artwork based on localized visual imagery that includes the Brandenburg Gate and the famous Olympiastadion that hosted some of the most memorable matches in history of soccer, including the 2006 World Cup final.

With such a high-quality visual concept in place, the league can turn on its advertising machinery with full power, amplifying the central message across multiple channels. Digital channels figure to be a large part of this and it wouldn’t be a huge surprise if new logo was widely shared on social networks by proud Berliners and fans of the qualifying teams alike.

The official press release describes why this specific design was selected: “The overall objective of the final identity is to provide a truly unique and memorable experience that lives long in the minds of fans, players and partners alike. The final concept for 2015 is ‘Champions Unite’ and is based on the idea that the best clubs in Europe will meet in Berlin, competing to win the UEFA Champions League trophy.”

Since the final is played in a different city every year, we can fully expect the Champions League brand to continue evolving and diversifying in this way. Proof of this undergoing evolution can be found when looking at the finals logos of the past years: 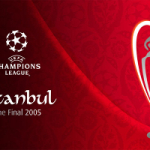 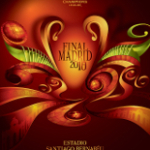 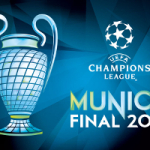 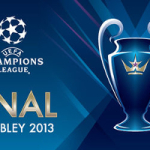 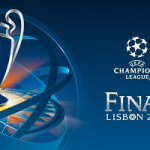 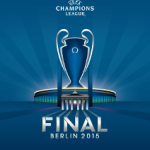 Did you know? Bayern Munich and Borussia Dortmund recorded a jaw-dropping 566% spike in combined number of Twitter followers in the six months after the teams met in the 2013 Champions League finals?