Become a Contributor!
By Julian on December 9, 2014 Digital

Manchester United and its sponsors are increasingly harnessing the power of social media to establish a deeper connection with fans worldwide.

Despite huge traditional marketing budgets, smart executives of top football clubs in Europe are turning to social media to allow their fans to have an insider view on all activities and truly become a part of the family.

“The use of Facebook and Twitter during the World Cup has demonstrated to the world that if anybody had any doubts that the social platforms are the dominant communication channel, that Facebook and Twitter are clearly that” commented Mark Tack from Chicago-based digital marketing company Vibes.

Always the club to be on the front line of innovation in general, there is no surprise that Manchester United has been leading the charge at the social media battlefield in recent months, starting a few very interesting actions.

It all started when the Premier League club accepted a seven-year sponsorship offer from Chevrolet this summer, agreeing to a new design of the official match-day shirts as a part of the deal. Both partners decided to celebrate their new contract and promote the new shirts with help of Twitter and Facebook by running a campaign that allows fans to get familiar with shirts bearing the new logo.

Here’s how they did it: once a fan registered on a dedicated Manchester United website and allowed the posting of content on her or his personal social media pages, the fan will gain the right to proudly wear the new shirt in the virtual world. 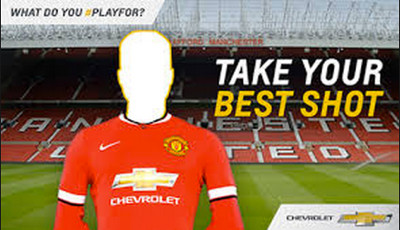 These pictures were spread by proud supporters hundred thousands of times across all social media channels and resulted in a big boost in awareness for the sponsor as well as the new kit.

This particular campaign was tied in with Chevrolet’s wider “What do you #PlayFor” campaign, which includes numerous socially responsible efforts such as rebuilding football pitches in developing countries with the participation from Manchester United legends:

However, this is not the only example of high-tech savvy exhibited by Manchester United’s marketing team. The club has a huge following of more than 20 million on Facebook – comparable to pop culture idols such as Justin Bieber. To execute its social media strategy the club uses platforms such as Facebook, Twitter, Google+ and Sina Weibo (Chinese version of Facebook) to reach supporters all around the world. In addition, the individual players were using Twitter and other social networks for years, bringing free publicity to the team and making the fans feel like a part of the inner circle.

The marketing team at Manchester United realized that it is difficult for the individual fan to keep up with all the information across all different social media channels. As a result, the club launched its own social media hub that brings together fans from the entire world and allows visitors to receive all Manchester United-related posts through a single interface instead of actively searching for hot stories around the web. Have a look yourself: HERE.

Besides the obvious benefit for its supporters, Manchester United opened up with the launch of the new social media hub an additional advertising space for its sponsors.

Obviously, big football brands are doing everything they can to tap into the amazing potentials of digital marketing, even if traditional channels (TV, magazine ads, billboards) still represent a lion’s share of their marketing plans. Finding a willing corporate partner is a big advantage is this respect, so sky is the limit for Chevrolet and Manchester United if they continue down this path.

Did you know? Despite the big success of Manchester United on social media, the club’s official Twitter account has only around 3.87 million followers, less than half of the total accumulated by Real Madrid’s icon Cristiano Ronaldo who is followed by almost 8 million fans.