Long gone are the times when the only football boot colors to choose from were black and…black. In an attempt of the main shoe companies to stand out from the competition, players can nowadays choose from all colors of the rainbow.

Given the huge amounts of money at stake in the market for football footwear, it comes as no surprise that Puma thought about a way to attract people’s attention to their products, away from Nike’s fluorescent shoes and the ‘Battle Pack’ from Adidas. 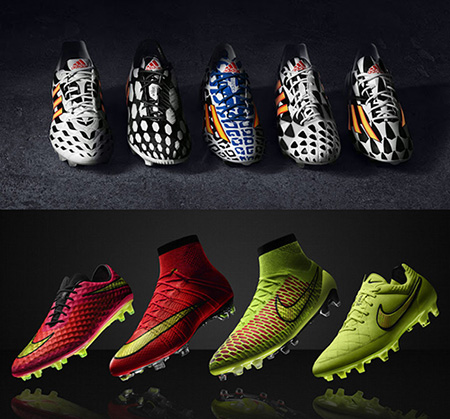 Nike and Adidas boots for the World Cup 2014

But how do you achieve to distinguish your boots from a competition which is already stretching the boundaries of shoe design and has a much higher advertising budget? The answer is simple but at the same time daring: let the players wear two different shoes!

In line with Puma’s positioning as the creative leader in Sportlifestyle, its designers came up with boots characterized by mismatched colours, turquoise blue for the left foot and pink for the right. According to Puma, the new evoPOWER ‘Tricks’ and their unusual look “represent the unshakable confidence of players who wear them, and evoke their potential to do the unbelievable”. This message is communicated with the following advert:

Despite the unusual mismatched colours, Puma’s ‘Tricks’ are worn by the likes of Mario Balotelli, Sergio Aguero, Cesc Fabregas and Yaya Toure during the World Cup 2014.

Mario Balotelli: “I have to be honest, the first time I saw the boots, I thought the Puma guy was mad. But when I realized he wasn’t, I was already excited. In the end, it is exactly the reason why I chose to be with Puma, They dare to be different, and everyone knows that I do as well.”

All in all, Puma’s bold product strategy and commitment to break with norms has to be counted as a great success for the company. The odd-coloured boots were catching the attention of a global audience and were a hot topic which was discussed by media outlets around the world.

Did you know? Footwear is the only piece of major equipment which players are free to choose during a FIFA tournament (even if they are made by the rival of their team’s contracted football kit company).