For the majority of football enthusiasts, the FIFA World Cup is an event which is followed on a screen at the bar next door or on TV at home. Not surprisingly a lot of electronic brands are trying to profit from this. In an effort to stand out from competitors such as Sony, Toshiba or LG, Samsung equipped all its 2014 Smart TV models with a special application named ‘Soccer Mode’ which Samsung executive Brad Wright calls “an incredibly intelligent piece of technology”.

As the application is meant to transform the living room into a football stadium, it comes with a wide range of football specific features. Rather unspectacular characteristics of Soccer Mode are an optimized contrast between the football pitch and the players’ shirts and enhanced sound quality. What adds however value to a viewer’s experience especially in countries where many games are taking place during the late evening and early morning, is the possibility to automatically record key highlights in games. This is made possible through a processing engine paying particular attention to the commentators and the scoreboard.

In addition, Soccer Mode will allow users to zoom-in and instant replay which comes in handy when the fan wants to review a disputable referee decisions. Also, the application features a split screen mode where football fans can multi-task on the TV while watching the game. For example, viewers can research information about the teams or catch-up with their friends, commenting and sending messages across all social media channels. This is a highly appreciated function as according to Juárez, Senior Manager for Audiovisual at Samsung Mexico, “TV is not just TV anymore – it’s a multi-task experience”.

One of the core markets Samsung hopes to target with its Soccer Mode is Latin America where the company has been the leading television brand for the past four years. 80% of Latin Americans say they like football, 50% say they talk about it once a week, and 25% call themselves ‘addicts’.  To target exactly this audience and to break through the clutter in the run-up to the World Cup, Samsung has contracted Lionel Messi to promote its newest product feature:

To enhance even further the experience for football fans in the Americas, Samsung introduced in cooperation with ESPN ‘Samsung’s Soccer Panel’ on their Smart TVs.  Here, viewers can select their favorite team and the Soccer Panel will intuitively present news around the club, information about upcoming matches, rankings of the team, as well as videos of the club’s recent matches. Below is how the Soccer Panel looks like on the TV: 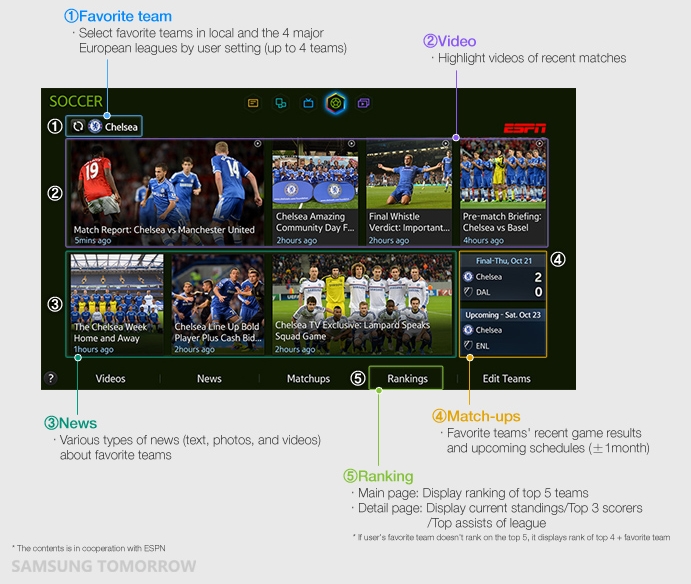 Soccer Mode by Samsung is an interesting case as it represents a very good example of how marketing can influence the product ‘P’ of the marketing mix. By integrating the application into its 2014 product line, Samsung was able to differentiate itself in the marketplace and place the focus of its communication on a value adding feature rather than simply promoting again an enhanced resolution of the TV screen.