Become a Contributor!
By Julian on April 28, 2014 Branding, Sponsoring

In December 2013 the FC Barcelona announced a strategic partnership with Intel inside for the next four and a half years. Besides equipping the youth academy of the FC Barcelona, la Masia, with its newest technology products, Intel inside will pay $25million to have its logo on the inside of each and every of the players’ shirts. The agreement is the first of its kind in the world of football. Never before has a shirt ever featured a logo in such a position.

Sandro Rosell, FC Barcelona’s president stated that “[this partnerhsip] will mean much more than a financial sponsorship deal, as it will also help us to become one of the most technologically advanced clubs in the world”. It is of particular strategic importance that the club’s partnership with Intel will not interfere with any the previously existing sponsorship deals with Nike, Audi, and Qatar Airways.

From Intel’s point of view the partnership with the FC Barcelona seems to be a good match. Sponsoring the inside of the shirt is perfectly in line with its famous advertising slogan “Intel inside”. Moreover, due to the novelty of the positioning of the logo, a great number of major newspaper and magazines featured the announcement of the partnership between the club and the chip maker corporation from California.

Yet the logo will only become visible when players celebrate a goal or exchange their shirt after a game. However Intel reassured quickly that players are not obliged to pull their shirt over their heads when scoring a goal. “We did not want to put the players under any obligation to show the logo a specific number of times but we do know that such goal celebrations are a big part of the culture of the sport” (Intel’s Chief Marketing Officer Deborah Conrad).

As a matter of fact, Barcelona’s first match with Intel’s sponsorship (FC Barcelona 2 – 1 Villarreal, 14th December 2013) paid dividends when Neymar flipped the shirt over his head after scoring his goal. 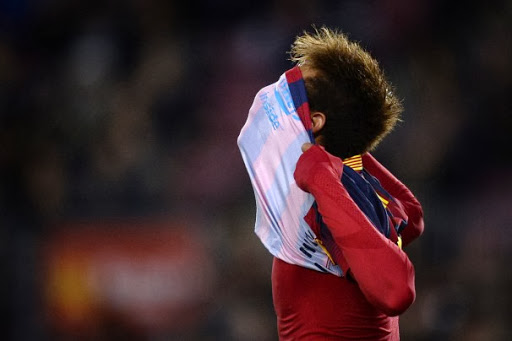 Neymar celebrating his goal with ‘Intel inside’

Did you know?  The FC Barcelona did not have a shirt sponsorship agreement until 2006, for 107 years – now it possesses two of such kind.